In the lead-up to the forthcoming Guatemalan general elections of June 2019, the International Foundation for Electoral Systems (IFES) organized the first BRIDGE workshop on introduction to electoral administration and access. This capacity building initiative took place in Guatemala City from 31 January to 1st February 2019, and was organized in partnership with Guatemala’s Supreme Electoral Tribunal (TSE) and with financial support from United States Agency for International Development (USAID). This training was mainly addressed to electoral staff and members of the disability rights organization National Council for Persons with Disabilities (CONADI). Its main goal was to analyze the gender approach and the political participation of under-represented groups from an election management perspective, allowing participants to reflect on their daily work at the TSE and sharing good practice in the area of inclusion.

During the two-day workshop, participants were exposed to comparative perspectives on models of election management across the Latin American region, as well as different approaches to promote inclusion throughout the electoral cycle. The didactic methodology of BRIDGE also included team-building activities, hands-on civic campaign development and evaluation, and engaging rich discussions about professional ethics and integrity. Furthermore, the second day focused particularly on access of under-represented groups to the electoral process, and participants could learn more about the obstacles to the participation of women, youth, people with disabilities and LGBTI persons, as well as possible solutions based on good practice from other countries, especially in Latin America.

In his opening remarks to the second day of the BRIDGE workshop, TSE President Magistrate Mario Aguilar thanked IFES for its continuous support to the TSE and praised BRIDGE’s objectives to promote democratic principles and electoral best practices and to enhance participants’ skills with useful tools and resources. CONADI Director Sebastian Toledo also mentioned the importance of the workshop in giving electoral accessibility and inclusion the attention and priority these topics deserve.

Under the Electoral Governance and Reforms Project funded by the U.S. Agency for International Development, IFES will continue to collaborate with the TSE to strengthen the capacity of its personnel to administer successful, transparent and inclusive elections and contribute to the consolidation of democracy in Guatemala. 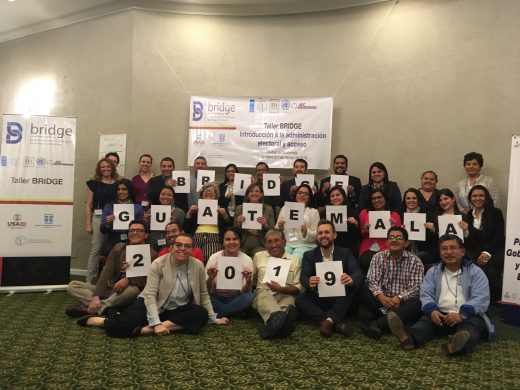