Representatives from over 70 civil society organizations participated in two online BRIDGE workshops on gender and elections in Mexico. These trainings were organized by UNDP and the National Electoral Institute (INE) in the framework of the National Programme for the Promotion of Women’s Political Participation and were the first online BRIDGE workshops held in the Americas. The goals of this initiative included strengthening capacities of Mexican civil society on gender and elections matters, as well as providing knowledge on strategies and good practice to promote women’s participation in political and electoral processes. The first workshop took place from 1 to 3 of December, and the second from 7 to 9 December. Both workshops were preceded by an opening session on 30 November with speeches from the organizers and guidance on the use of technology and digital platforms. The common closing ceremony for both workshops took place on 10 December, when both the Human Rights Day and the ending of the 16 Days of Activism Against Gender-Based Violence were also commemorated.

Some of the innovations and learnings from this experience include the development of a virtual classroom on Moodle, which proved to be a valuable resource, a specific session to get familiar with technology and the innovative and creative use of technological tools in addition to Zoom, such as Jamboard, Mentimeter and the collaborative text editor Framapad. These resources allowed facilitators to develop a participatory learning environment where participants could express themselves and exchange ideas through digital platforms.

The first day of each workshop was dedicated to laying the foundation on the knowledge framework, and participants debated the meaning of gender and how gender-based stereotypes restrict the rights of men and women and their possibilities to thrive. Facilitators also offered updated data and statistics on women’s representation in parliaments worldwide, which currently barely reaches 25 percent. The second day of the workshop was dedicated to discussing entry points for stakeholders to promote gender equality and women’s participation in the electoral process. The electoral cycle was presented as a knowledge tool that allows understanding elections not as a single event but as a long-term process with different stages. All throughout the cycle, participants debated possible actions that political parties and Electoral Management Bodies can take to promote women’s empowerment and political participation. On the third day, the workshops explored strategies to promote change, addressing the topics of violence against women in elections and the gender approach in civic and voter education. As a conclusion, participants engaged in a dialogue circle, exchanging their experiences as members of civil society in promoting women’s participation in politics and elections.

These workshops were organized in the lead-up to the 2021 Mexican federal elections as a way to strengthen the specialized capacities of civil society and improve the inclusivity and integrity of the electoral process. Engaging national stakeholders in gender equality can contribute to promote women’s participation in political and electoral processes. Furthermore, these training allowed the INE to introduce and deepen the use of BRIDGE methodology in electoral management in Mexico, with the aim of promoting national ownership of the BRIDGE project in the long run. 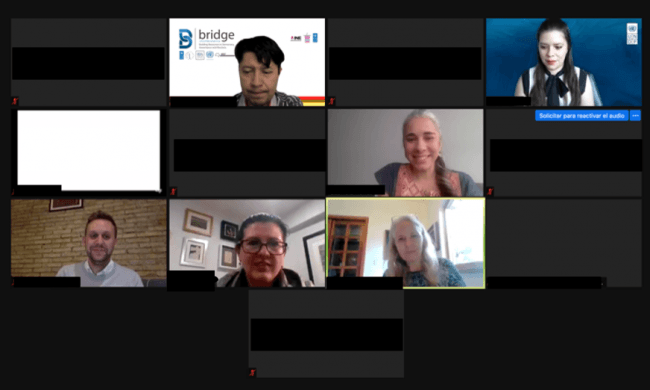