The sub-regional workshop is the outcome of previous and ongoing consultation between UNIFEM GEPG and Governments, women’s organizations, civil society, other UN agencies and donor partners for collaboration in empowering stakeholders towards advancing gender equality in political governance in the Northern Pacific countries; as well as supporting the implementation of the Convention on the Elimination of all Forms of Discrimination against Women (CEDAW).

The workshop brought together about 40 participants (35 women and 5 men) from the Republic of Marshall Islands, Palau and the participating States (Pohnpei, Chuuk, Kosrae & Yap) from within Federated States of Micronesia; including Senator Magdalena Walter and Chief Justice Antonia Amor who are both from Pohnpei and Imaikta Betty – of WUTMI (Women United Together Marshall Islands) and Council woman/member for RMI. Amongst all other important participants in influential positions to effect change in the 3 respective countries were: 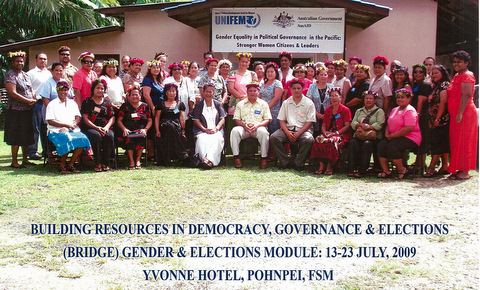 The resource persons were from Niue, Palau and Fiji and included:UNIFEM GEPG Regional Office – Suva Fiji

The Gender and Elections Module has four (4) main objectives:

At the end of the training workshop, participants walked away with better understanding of six (6) important points on which the module is based. That:

Immediate Positive Outcomes of the Workshop for UNIFEM GEPG

UNIFEM’s GEPG Programme is a 5 years initiative co-funded by AusAID under its Pacific Leadership Programme (PLP). The programme will contribute to advancing gender equality in political governance in the Pacific region at both national and local levels with the main purpose of increasing the participation of women as active citizens and leaders.

The workshop ended on Thursday the 23rd July by Mr. who gave the closing remark from the FSM Department of Health and Social Services Secretary, Mr. Vita Skilling. (Please read Closing Remarks attached). Most participants including facilitators departed Pohnpei on Friday 24th July, 2009 whilst the remaining participants departed a day later.

Inclusion and Introduction to Elections in Sri Lanka