Mixing Media and Elections in Centurion

As winter set in on the Pretoria Highveld, International IDEA hosted a Media and Elections BRIDGE Course as part of the African Union/International IDEA Joint Activity Plan. With funding from AusAid, 24 media and election practitioners from across the southern African region gathered at the Protea Hotel Waterfront Centurion from 17 to 21 June 2013.

The course materials were based on the Media and Elections Module, freshly reviewed by the BRIDGE Office. Previously the material for the module had a distinctly “adversarial” tone and approach, characterising the relationship between election practitioners and the media as one of control and prone to “correction” with sessions such as “if things go wrong”. The rewrite of the module focussed much more on developing a co-operative relationship between the two stakeholders in the electoral process and this approach was the primary focus for this workshop. This was particularly prudent as the audience for the event was of a more mixed nature, including both media and election practitioners.

The course content was structured around five thematic days, seeking to strike a balance in terms of content focus for the combined audience of media and election practitioners. In this regard, broad concepts pertaining to both areas of work required emphasis. The five thematic days were organised as follows:
• Day 1: Introduction and Electoral Cycle
• Day 2: Role of the EMB in relation to the Media
• Day 3: Legal and Institutional Frameworks
• Day 4: Media Tools and Techniques
• Day 5: Strategic Communications Planning

Two important contributions took place, namely the use of a guest speaker from the South African Election Commission; Ms Kate Bapela, and the closing ceremony which was addressed by the African Union Special Rapporteur on Freedom of Expression and Chairperson of the Election Commission of South Africa; Advocate Pansy Tlakula. 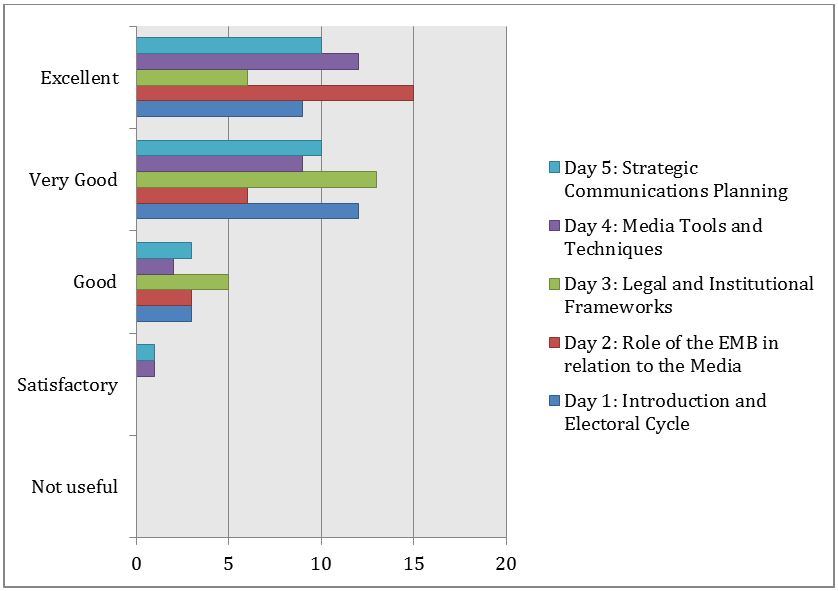 At the end of the course, Matheantoa Selebalo from the Lesotho EMB commented that “I am a new person from yesterday in as far as EMB and media operations are concerned”. Many of the participants commented on the fact that they learnt a lot more about the importance of the relationship between the EMB and the media and how to structure this relationship more constructively. Future course are advised to bring on board a media representative as a guest speaker to enrich the course further.