Nepal has been a consistent user of BRIDGE and over this past ten years, the Election Commission of Nepal (ECN) has worked closely with the BRIDGE partners represented in the country (UNDP, IFES and International IDEA) to build BRIDGE into its professional development program. Following an intense electoral period in 2017, resulting in a natural break in the commissions’ long term capacity building programme and a number of staff and leadership changes in the ECN during the immediate post-election period, it was decided by the ECN that a one-day Showcase of BRIDGE methodology and version 3 content be conducted. The target audience of the Showcase were ECN Commissioners, senior managers of the ECN secretariat and key officials from other government ministries. The aim was to increase awareness, create common understanding and provide the basis for informed decision making for the future use of BRIDGE in Nepal. In consultation with the ECN leadership, the BRIDGE Committee (representing the ECN and the BRIDGE partner organisations) decided the showcase would include a selection of activities from the Introduction, Legal Framework and Reform and Electoral Justice modules.

The Showcase was conducted at the Park Village hotel in Kathmandu on the 20th of August 2018. Among the 21 participants present, were the Chief Election Commissioner and Commissioners from the ECN, four representatives from the Ministry of Finance, Ministry of Home Affairs, Ministry of Foreign Affairs, Ministry of Education, Science and Technology. The remaining participants were from across the ECN. The facilitation of the workshop was led by Ross Attrill and Sara Staino, but the workshop also showcased the very talented group of Nepali Accrediting Facilitators, Surya Aryal, Shanti Ram Bimali, Radhika Regmi and Nikila Shrestha who all served to make it a much richer experience than it otherwise would have been. The Showcase was conducted in English and Nepali.

The program began with a discussion of the history of BRIDGE in Nepal and what Version 3 of BRIDGE will look like. It then covered a selection of varied activities which all illustrated the engaging nature of BRIDGE. 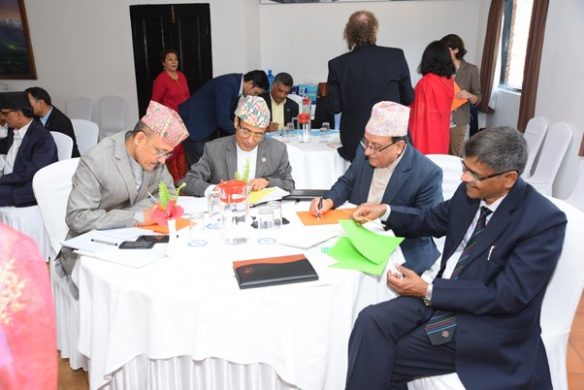